Making Popcorn: Adding a disk to a Rust Rumprun Unikernel

At least, that's my understanding so far. :)

For an excellent introduction to unikernels, I would recommend reading Unikernels: Rise of the Virtual Library Operating System. The article focuses on MirageOs, but the principles apply to the entire family of unikernels.1

While there is undoubtedly a certain amount of “What's old is new again”, unikernels seem compelling for select use-cases. If you'd like to read more, I've compiled a short list of other articles that I've found interesting.2

After learning about unikernels, my first reaction was “Let's build one in Rust!". Luckily for me, someone has already done all the hard work:

Running Rust on the Rumprun unikernel

Huge props to the author, Gandro, for making this whole thing available to the Rust community. It is fantastic!

This process utilizes NetBSD's rump kernel components to construct the unikernel. Because these components are POSIX-compliant you can run (most?) Rust code with no modification. Which is pretty cool!

The setup is straightforward, although it does take a while. First you build the Rumprun framework, then build a custom rustc that can cross-compile to the target platform. Finally, you cross-compile your code and “bake” it into a unikernel.

Update 11/19/2015: With the help of the rump crew on IRC, I sorted out the build issue on Mac OSX. I had a problem with libcloog depending on an old version of libisl, which was not compatible with the newer gcc. This was the error:

Which I eventually resolved by uninstalling and reinstalling cloog in homebrew:

So now I have rump setup on both my mac and linux laptops. \o/

Adding storage to a Unikernel

After running through the demo hello and hello-tcp examples, the first thing I wanted to do was write some files. While it ended up being simple, as someone new to Rump and qemu, it took some digging to figure out. Perhaps this article will save someone else some effort.

To add storage to our emulated machine, we first need to create a disk image:

That will create a 240mb image filled with zeros and format it as an ext3 file system.3 The tune2fs command disables automatic checking by e2fsck (-c disables triggering on count, while -i disables triggering by time). I really don't think this was necessary… but I found it in a guide and who am I to argue?

That's it! You can now use that image as a drive in qemu, or mount it in the host system to access the data.

To test the drive image, I wrote a quick demo:

Dead simple. First it tries to open /data/foo.txt: if it exists, read and print the contents to screen. Otherwise display an error. Next it tries to write to the same file, and either display a success message or an error.

To run this as a unikernel, we first cross-compile into a unikernel image:

What's that hw_virtio? That's the “target” we want to compile for. So in this case, we are compiling for hardware with virtio drivers. As someone new to this all, I had to look up what virtio is:

We can see what other targets are available by running rumprun-bake list:

So, for example, you could compile for a Xen platform by using cargo rumpbake xen_pv, etc.

The cargo command both cross-compiles with rustc and “bakes” the executable into a single image using rumprun-bake, so the end product is a single popcorn.img in our directory.

The final image is just a hair over 20mb. This contains all the code needed to boot the image, read/write files and print to stdout. Pretty neat! I was curious what Rump kernels were being linked in (output truncated a bit for brevity):

So we can see that our small app is pulling in the standard library, collections, unicode, rand, alloc, libc, and libcore.

Now that the unikernel has been baked, we need to run it via rumprun, a convenience tool provided by Rump to run a variety of platforms/virtualizations. We'll use the qemu target, and -b to specify the hard drive image (in the format “path,mount-location”).

You can see that rumprun is executing qemu with a virtio block device (/dev/ld0a) mounted at /data, 64mb of memory, no networking and booting from our image. Let's actually execute the command and see what happens:

This will pop up a qemu window showing the boot sequence: 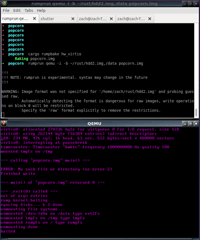 If you inspect the output in the emulator, you'll our application executing:

Perfect! This is exactly what you would expect from our code. It first tries to read /data/foo.txt, but fails because that file doesn't exist. It then performs a write and prints a success message.

If we run the exact same command a second time, we'll see: 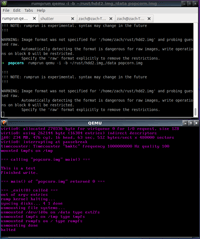 That demonstrates that on the second run, the unikernel found /data/foo.txt and successfully read the data into memory. Huzzah!

Mounting on the host system

It's convenient to be able to manipulate hard drive image on our host machine, so we can inspect the output of our unikernel or to setup some kind of directory architecture in advance.

To do so, we mount the image as a “loop” block device:

We can then manipulate the image as if it were a file system:

And when you're done, unmount it so it is accessible for qemu:

That's all for now. A mostly non-Rust article, but I spent the better part of the day trying to get a read/writable file system working with qemu. I figured someone else may run into the same difficulties and might appreciate some extra help :)

In the future I plan to start experimenting more with unikernels and Rust…hopefully with something more complicated than writing to a file.