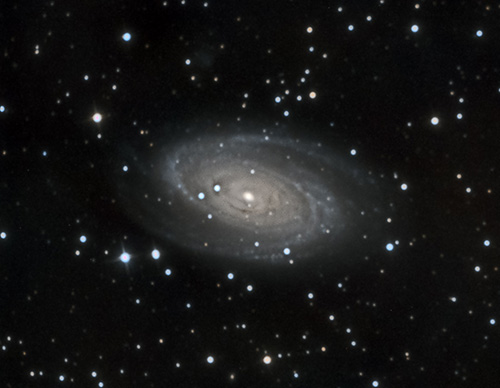 First target with my new scope, so a lot of time spent working out kinks in the setup. Fiddling with hardware in 6° F weather is no fun. :(

It looks like focus was off (e.g. some stars are donut's), collimation is a bit off (stars are coma shaped in some parts), and I totally botched the bias/flat images. No guiding because I'm still fighting drivers with SSAG + Win10.

I took roughly 5 hours of integration time over two nights, but clouds or poor focus pruned that down to 1.7hr. M82 was in some of the frames, but due to drift and incorrect rotation the second night I didn't have enough good frames to keep it in the image. So I cropped it out and just focused on M81.

Still learning pixinsight. Fighting DSLR noise in the background, and accidentally amplified some noise in the core with HDR and Median transforms.

Despite the lackluster final product, I'm fairly happy. I can see the potential of my setup once I iron out the details, just need to keep fiddling. :)