Rescuing a series of forum posts about an old Hive Guard model that I painted, so that I can save it for posterity :) 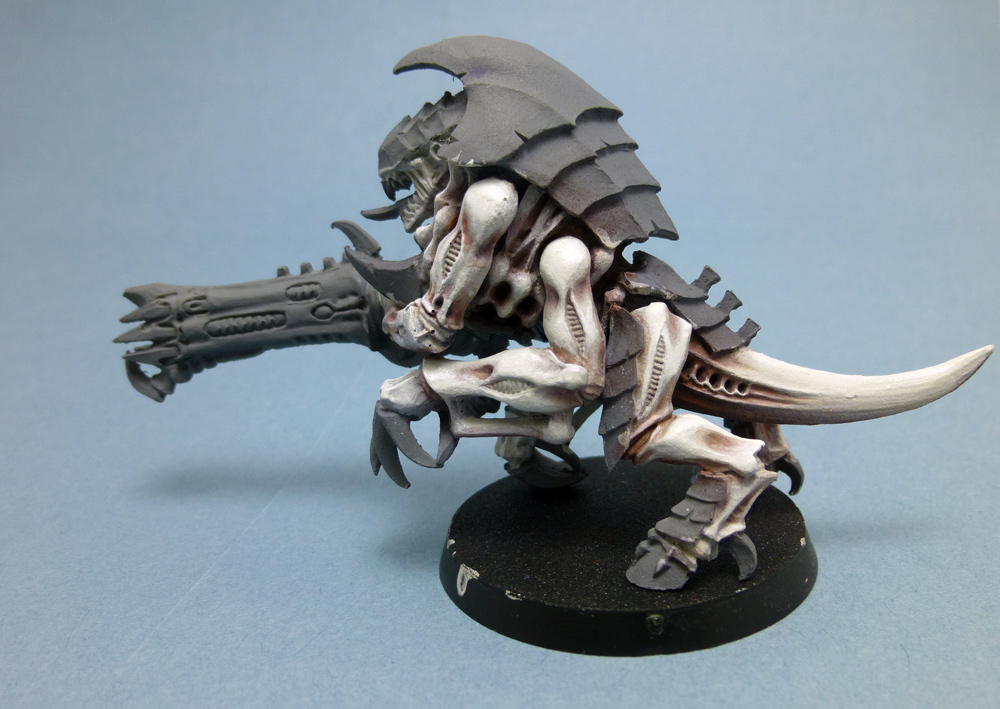 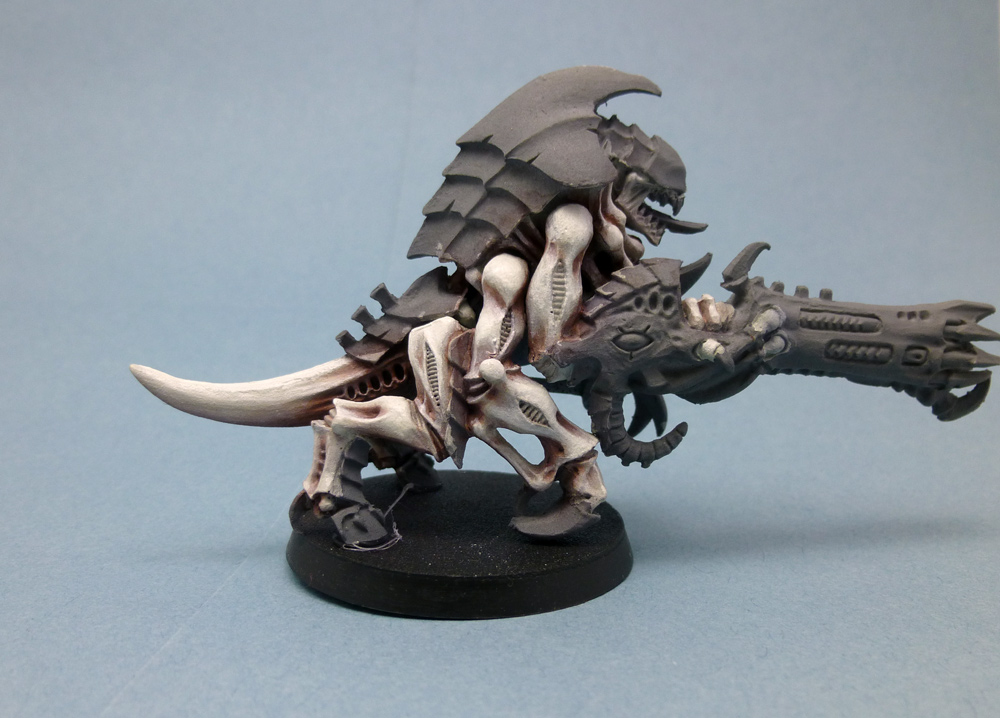 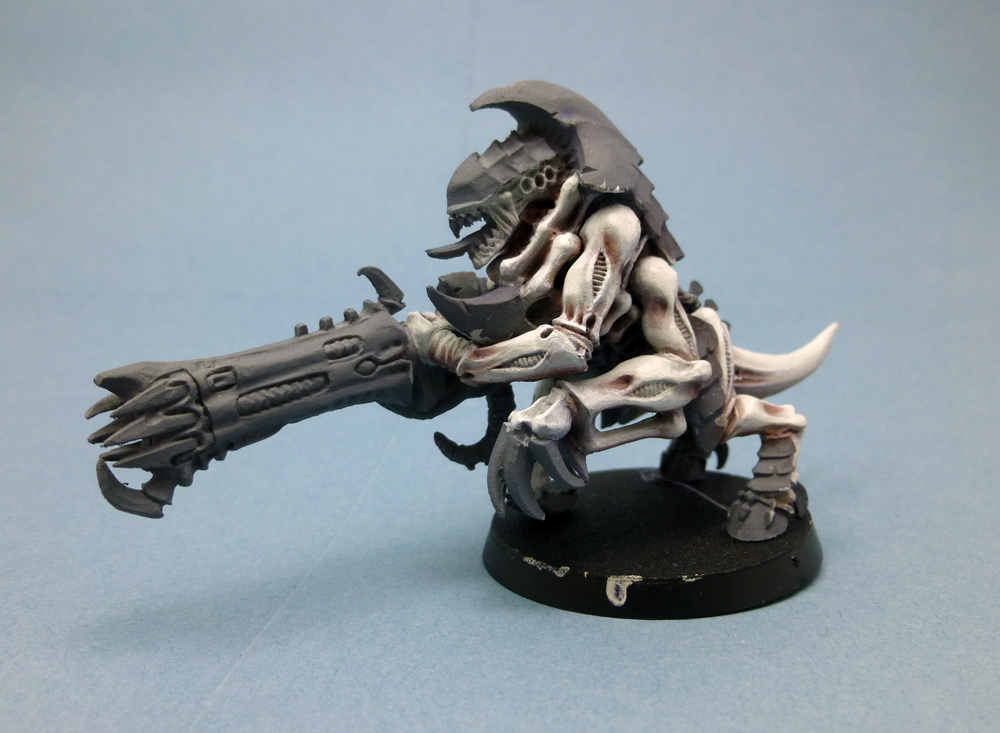 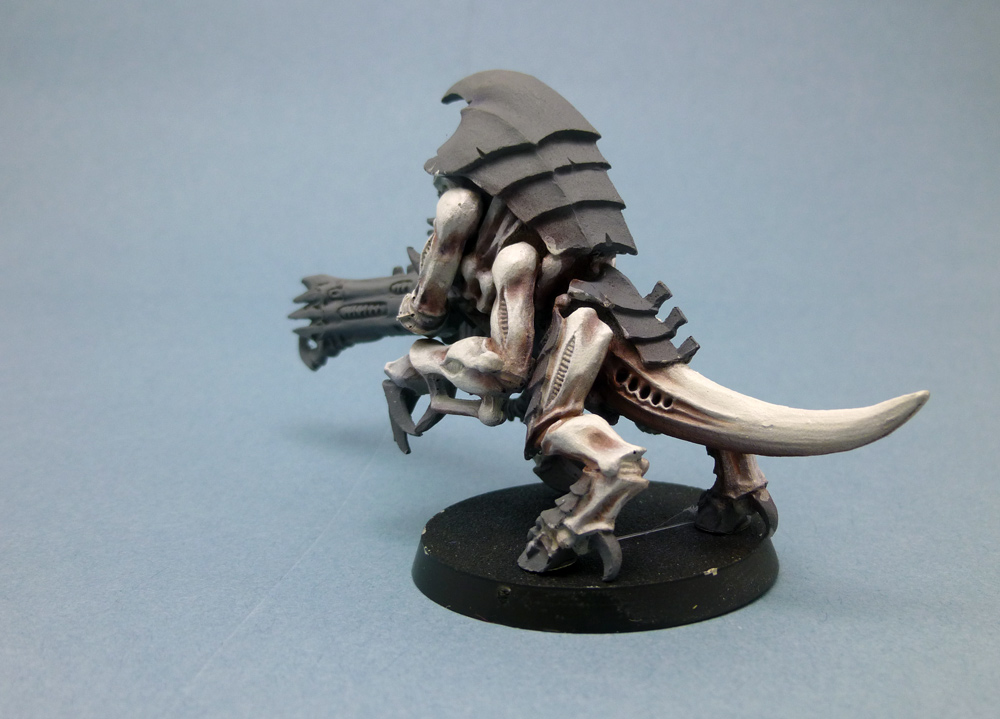 All paints are Vallejo Model Color. Skin tones were painted with:

Painted the carapace today, but just the base + shadows. Still need to do a few highlights although not much, I'm fairly pleased how it is turning out. Pigment is like a magic easy button…it feels like I'm cheating or something.

The blue is a bit glossy, I'm hoping it calms down after some highlight layers and another round of matte spray. 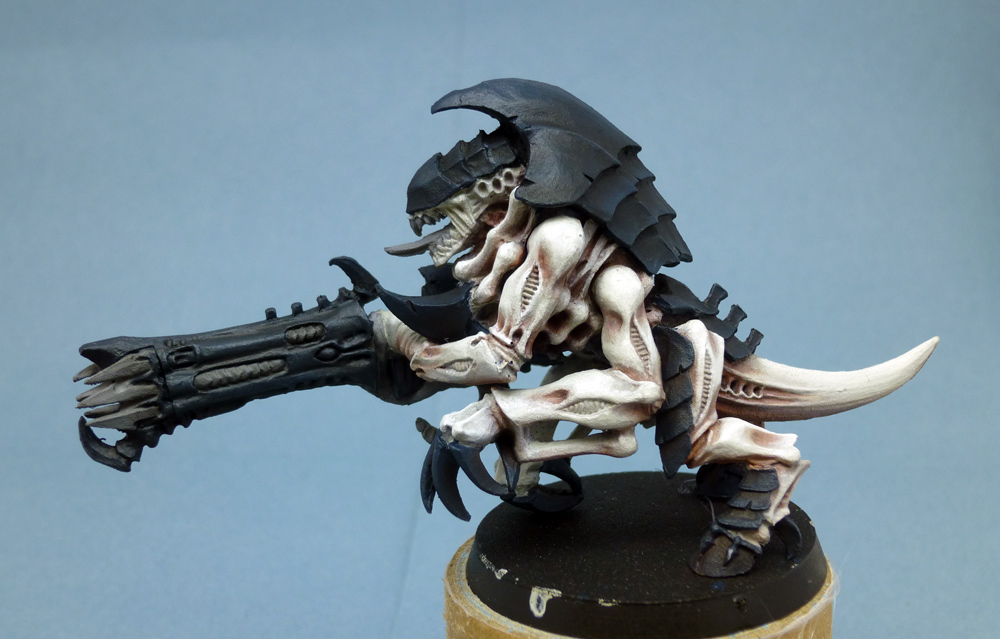 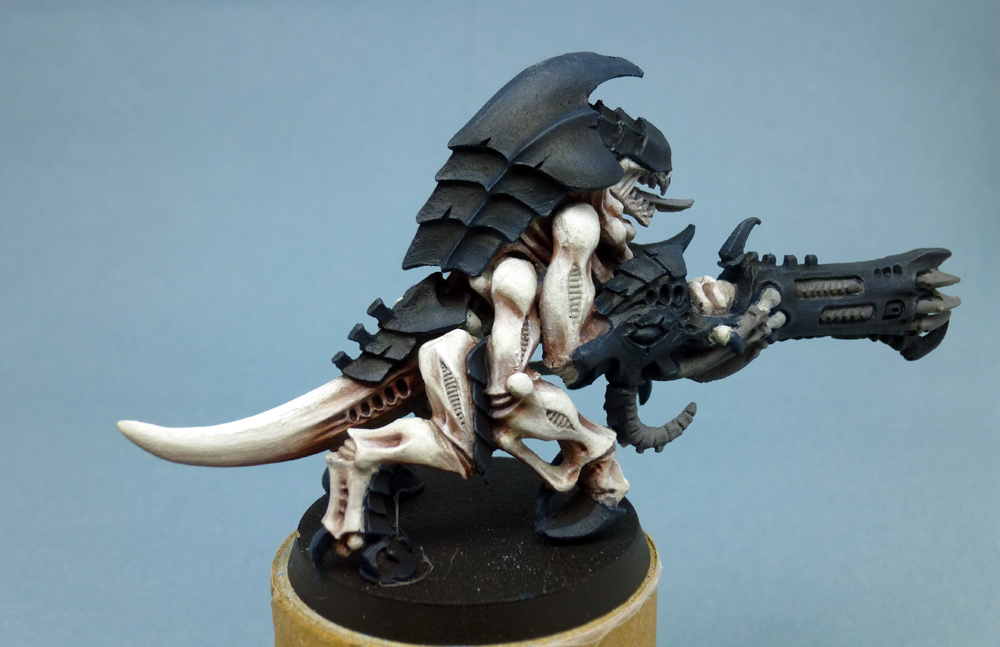 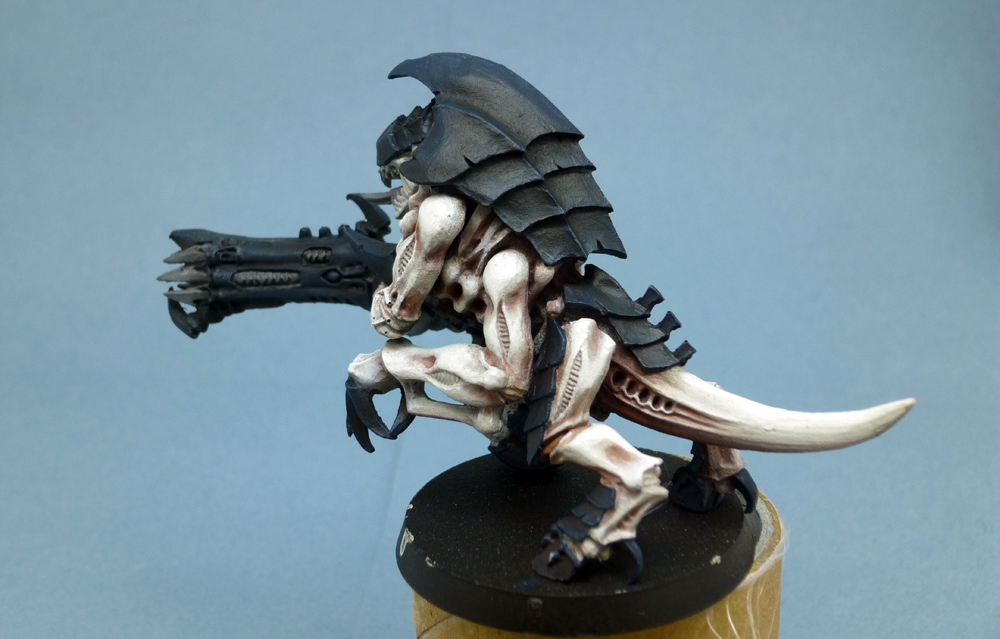 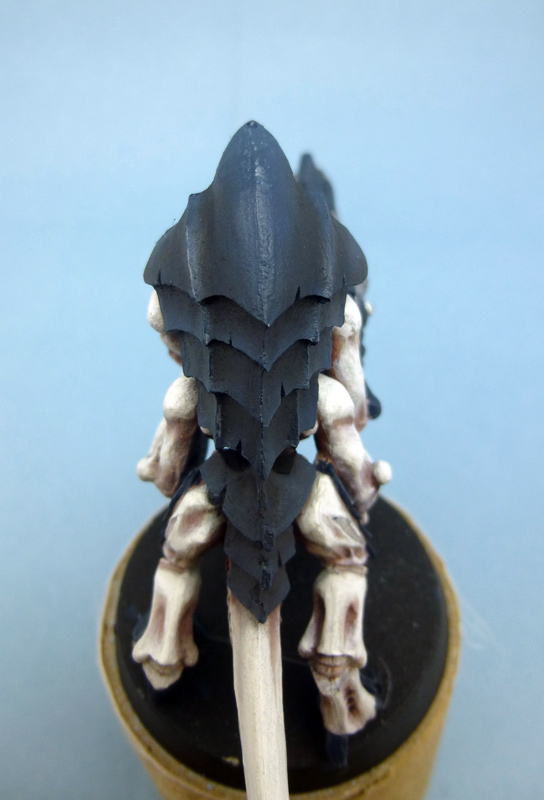 Here is the Les video that was mentioned: http://youtu.be/_PIFtCipLpA?t=5m27s

You basically treat it like a dry wash. It actually shares a lot in common with oil washes, now that I think about it. Identify locations of shadow, smoosh the pigment in and blend it out a bit. Then you go back over the model with a wet q-tip (or brush if you need finer control) and remove pigment from highlights and mid-regions. It remains infinitely workable until you varnish over it. I used a different purple at first and didn't like it, so I wiped the whole model down and redid it.

A stiff, flat drybrush works best. Small, stiff round brushes are good for nooks and crannies. I dip the brush in pigment, knock the brush onto a piece of paper to remove the big bits, then smoosh the pigment into shadows. Stippling motions work better than rubbing, as rubbing tends to flick the pigment off the model. Once the pigment has been placed in the shadows, you can drag it out for nice blends.

At some point, the pigment “saturates” and won't take any more color. You'll have to varnish and do another layer if that happens and you aren't happy with the color yet. If you rub the pigment into the paint too hard, it sorta “stains” the underlying acrylic and becomes difficult to remove with water. It will eventually come out, but it takes a lot more work.

With the skin, I put the pigment over a basecoat, varnished and built up highlights the traditional way. With the carapace, I painted the highlight color (blue) and then covered it with black pigment. Instead of building highlights with paint, I slowly “unveiled” the highlights with q-tips and wet brushes.

Aaaand I don't want to paint another Hive Guard for a while. I'm pleased with how it turned out overall.

Tried an OSL effect on the tubes running into the gun, royally screwed up the glaze and spent a lot of time trying to correct it. I realized that painting OSL on top of black is a very delicate matter. The effect was very easy on the skin, since it wasn't a huge contrast. But the OSL highlights on black were really noticeable. In the end it came out ok-ish, and looks better in photos than in real life. I also realized after painting the blue that those spiky bits on the gun are actually the ammunition for the Impaler Cannon, not part of the gun itself. Couldn't be bothered to paint them the correct color.

The base could use some more work (the “mud” color looks more like lava, the alien goo looks like lava, bricks are visible enough, etc), but I've hit the point of not caring anymore…I'll touch it up sometime in the future.

And sweet mother, I just could not kill the gloss on the black/blue! Two coats of Testors Dullcote and another coat of Vallejo brush on matte…still a certain amount of shine. Not sure what happened there. 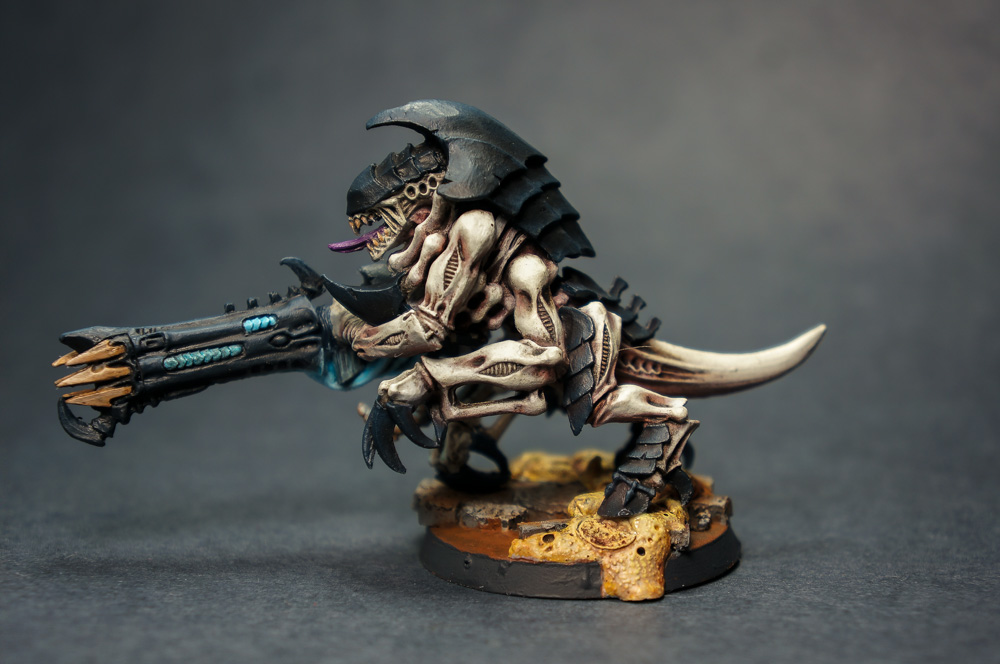 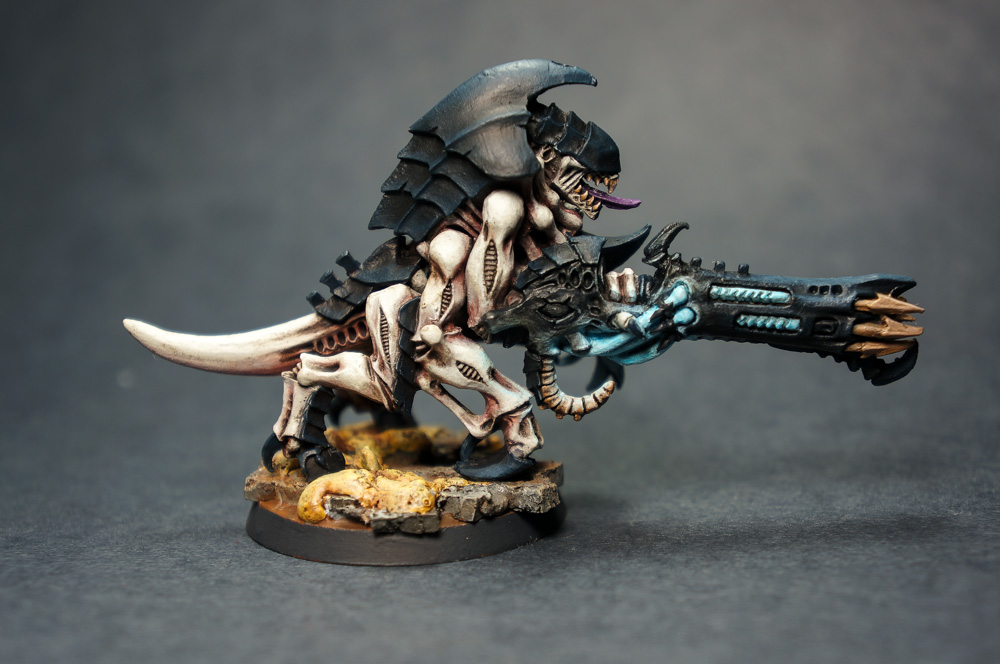 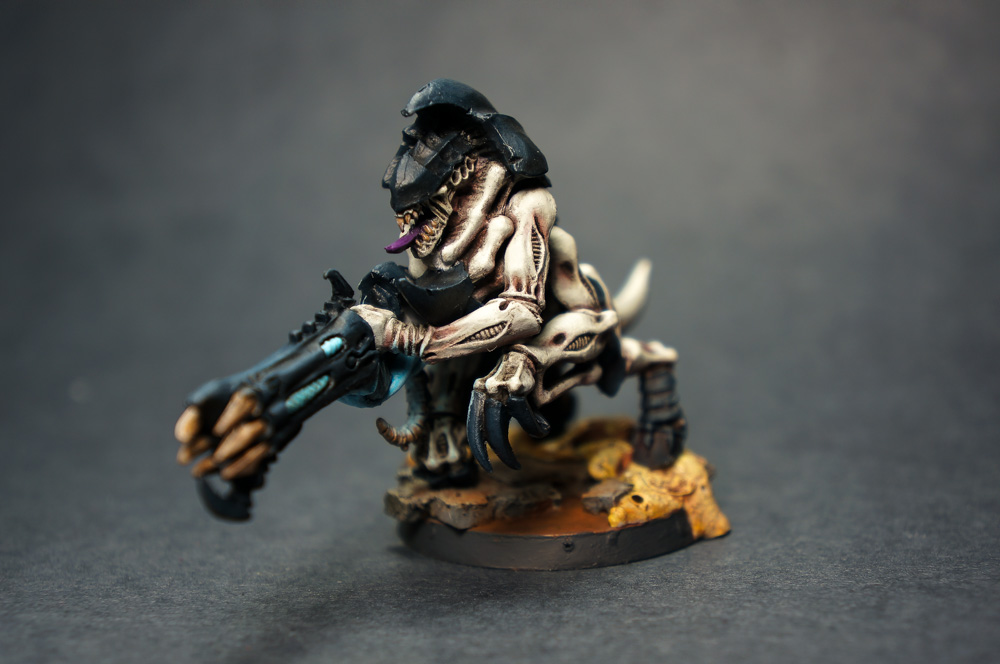 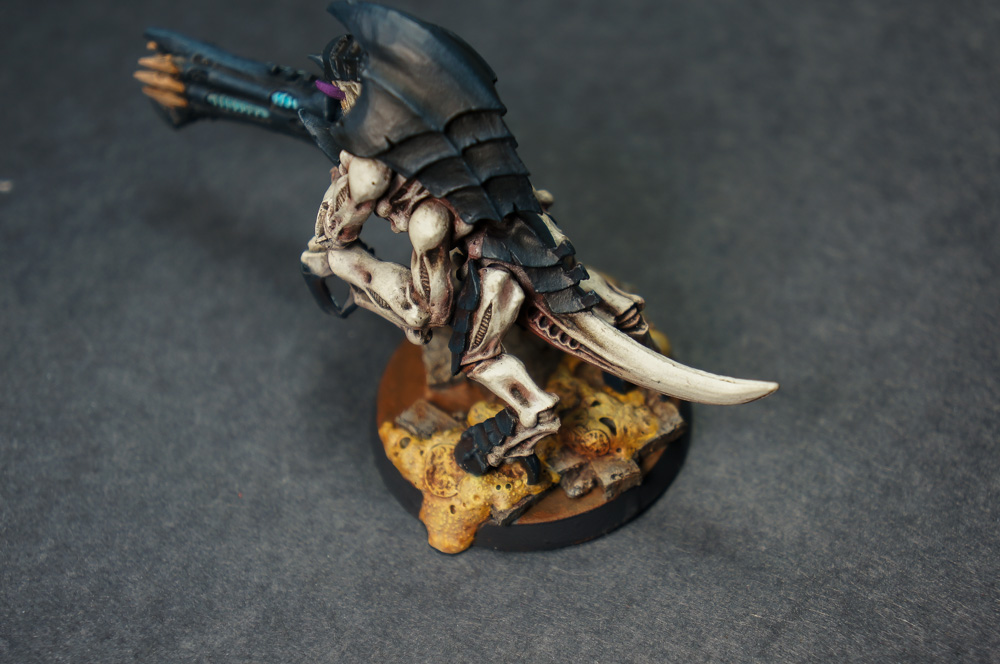