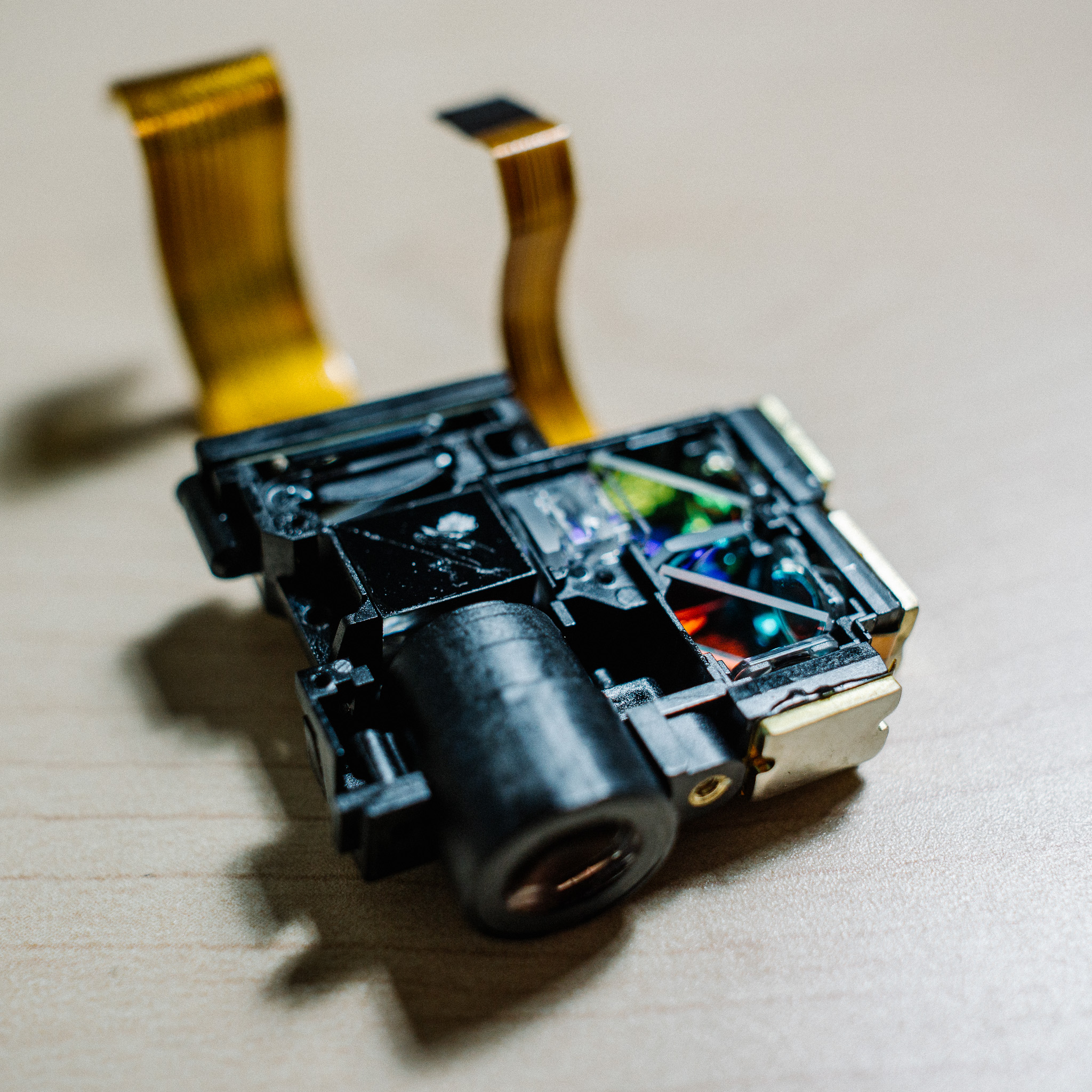 Having received my pico projector, the first order of business was cracking it open to take a look at the light engine. 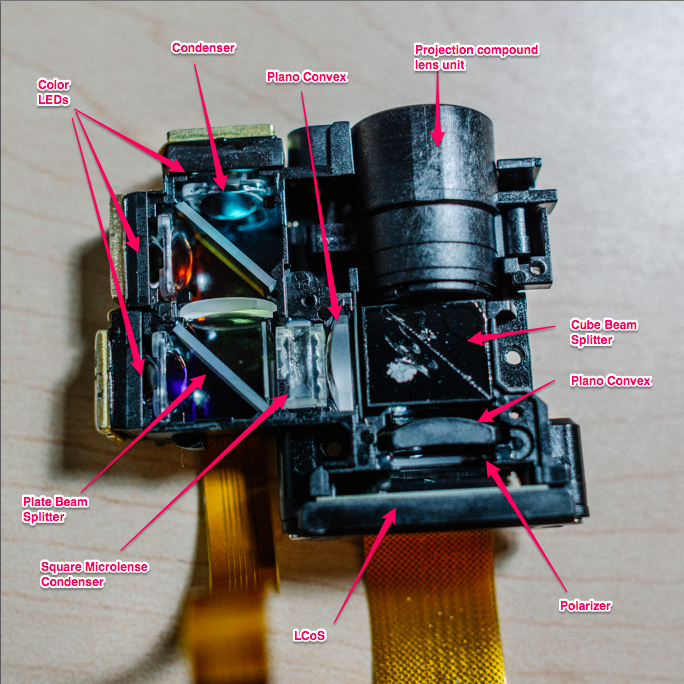 The light engine is a pretty compact little unit, measuring only a few centimeters wide and one cm thick. After poking around a bit, I believe I've identified all the important bits. Here is an annotated view: As you can see, there are three LEDs which provide the illumination. These LEDs are coupled to small heatsinks, which are then attached to a much larger heatsink (not pictured) via thermal tape.

Each LED sits behind a plastic condenser lens, and are then folded through 1-2 beamsplitters. The light is projected through a square microlens array. I wasn't familiar with what these arrays do, but Edmunds provides a good summary:

Microlens arrays are useful for homogenizing a variety of modern light emitters from line-narrowed excimer lasers to high power LEDs. Microlenses are well suited for applications that require high efficiency and non-gaussian uniformity.

Square microlenses are commonly used for beam homogenization and shaping, yielding spot patterns or a square flat-top pattern. The lenses feature a high fill factor which eliminates zero-order hot spots in the illuminated field. Square lenses are often used in pairs, in conjunction with a PCX lens (see above) 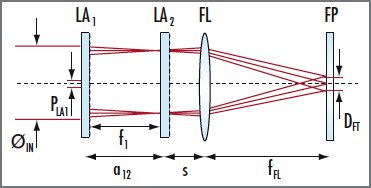 So there you go, it seems the array is being used as a kind of diffusor, to even out the hotspots from the LED. It is immediately followed by a plano-convex lens just like Edmunds noted. The LED light is then sent into a cube beamsplitter, which redirects the light towards another PCX lens. This lens focuses it through a polarizer (I think) and then impacts the LCoS chip.

Light is then either absorbed by off pixels, or reflected back through the beamsplitter, through the project lens and out into the world for viewing.

All in all, a pretty cute little package. The projection lens is a group of several plastic lenses, which all work to enlarge the image without introducing too many aberrations. It's focused by sliding forward/backwards with a thumbscrew. 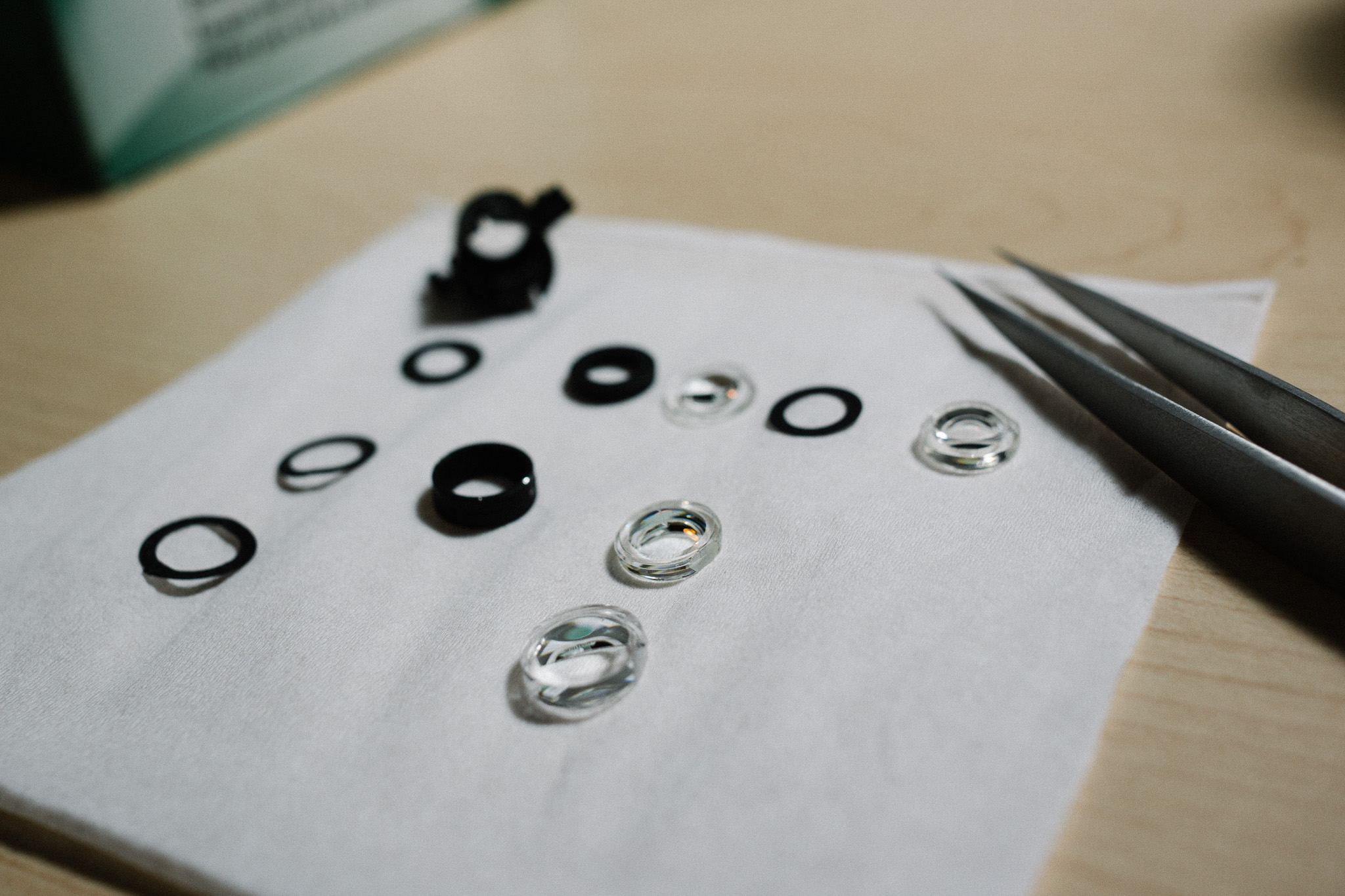 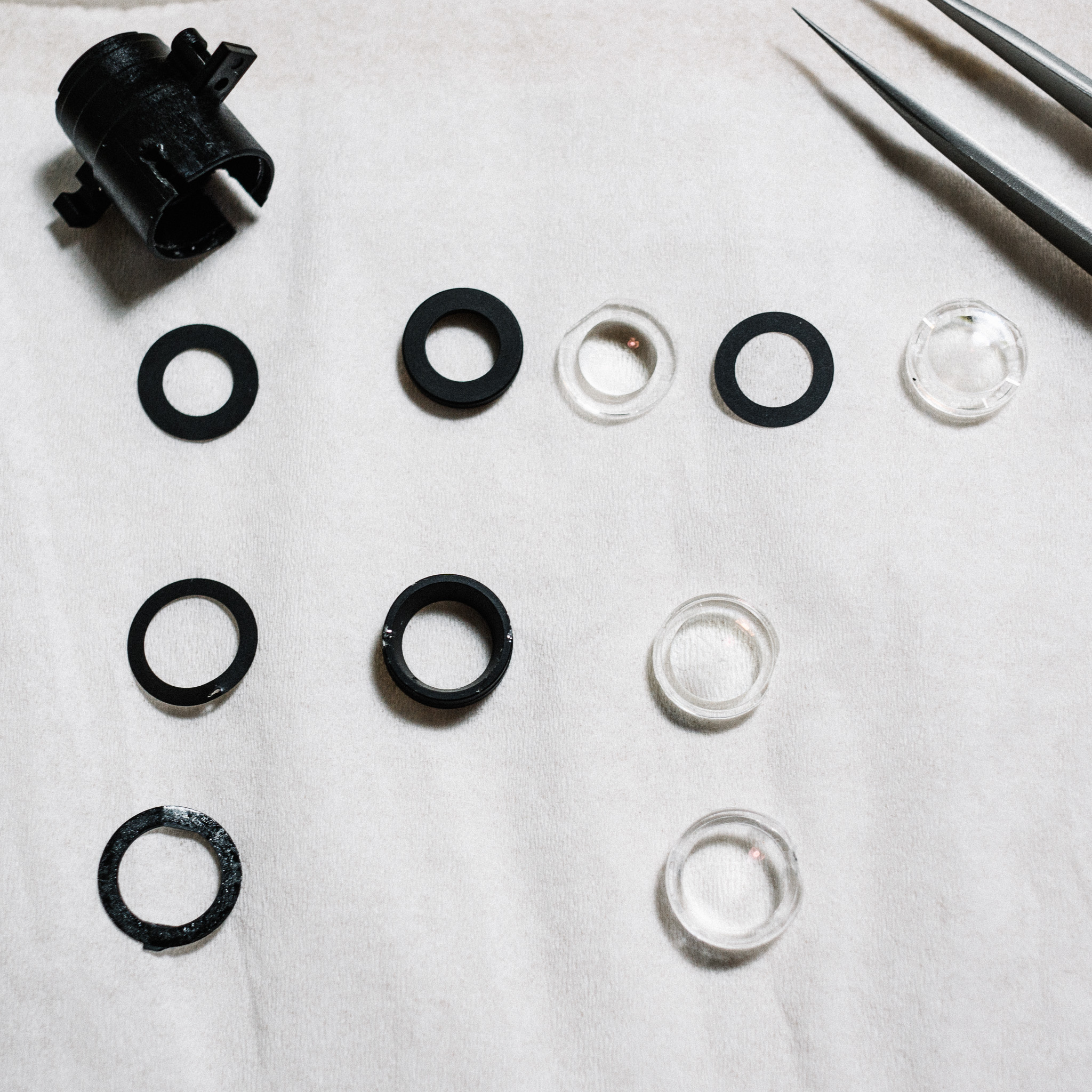 I didn't try too hard to identify the lenses to be honest, since I want to make the projected light small, not large. They are likely different combinations of negative mensiscus and PCX / PCV lenses. They were spaced in the housing with plastic washers.

Another view of the light engine, without the projection lens: 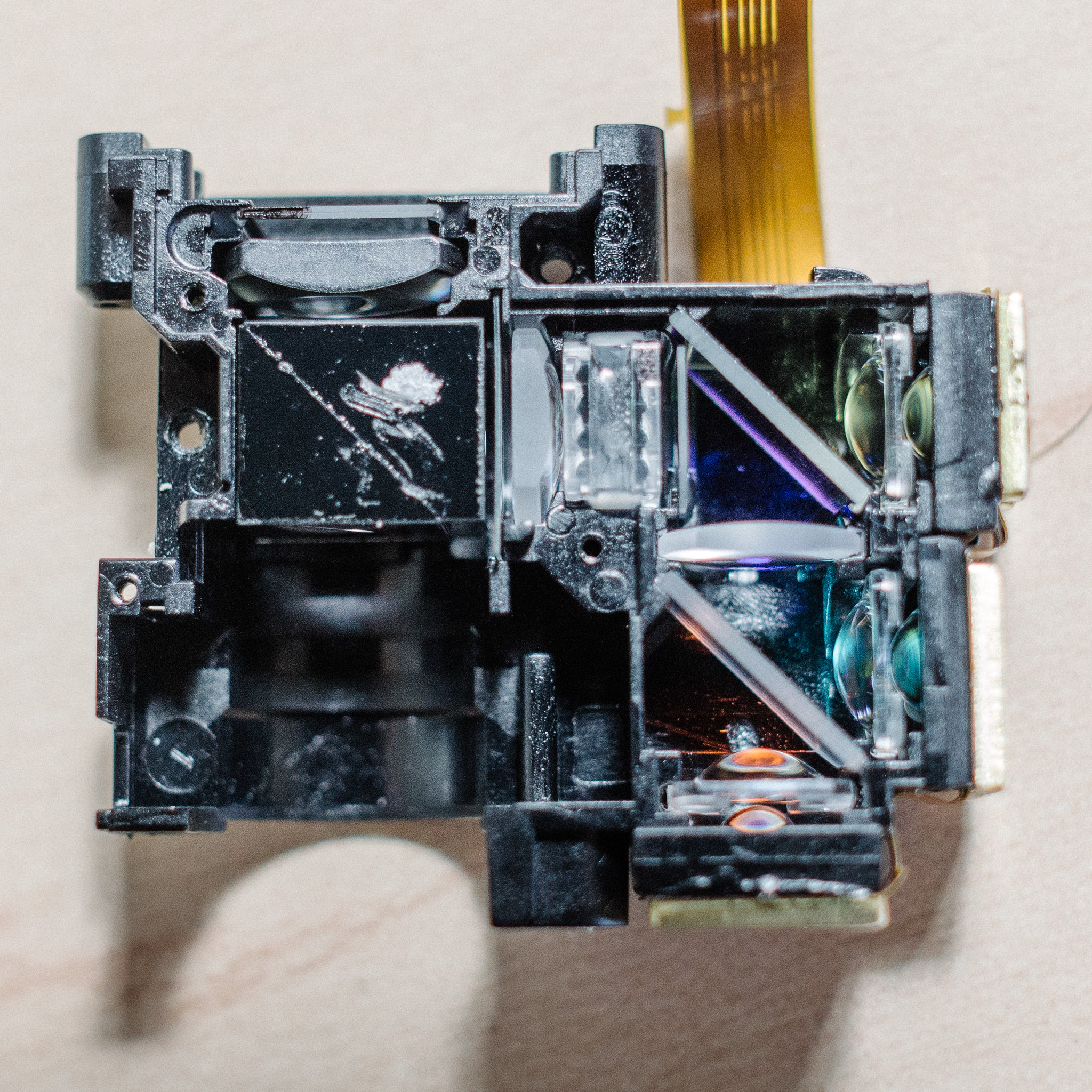 And finally, the LCoS itself. It's a tiny little chip, with the active area measuring perhaps 10x5mm. It attaches to the light engine with two screws, and includes a small PCB with some minimal support circuitry. 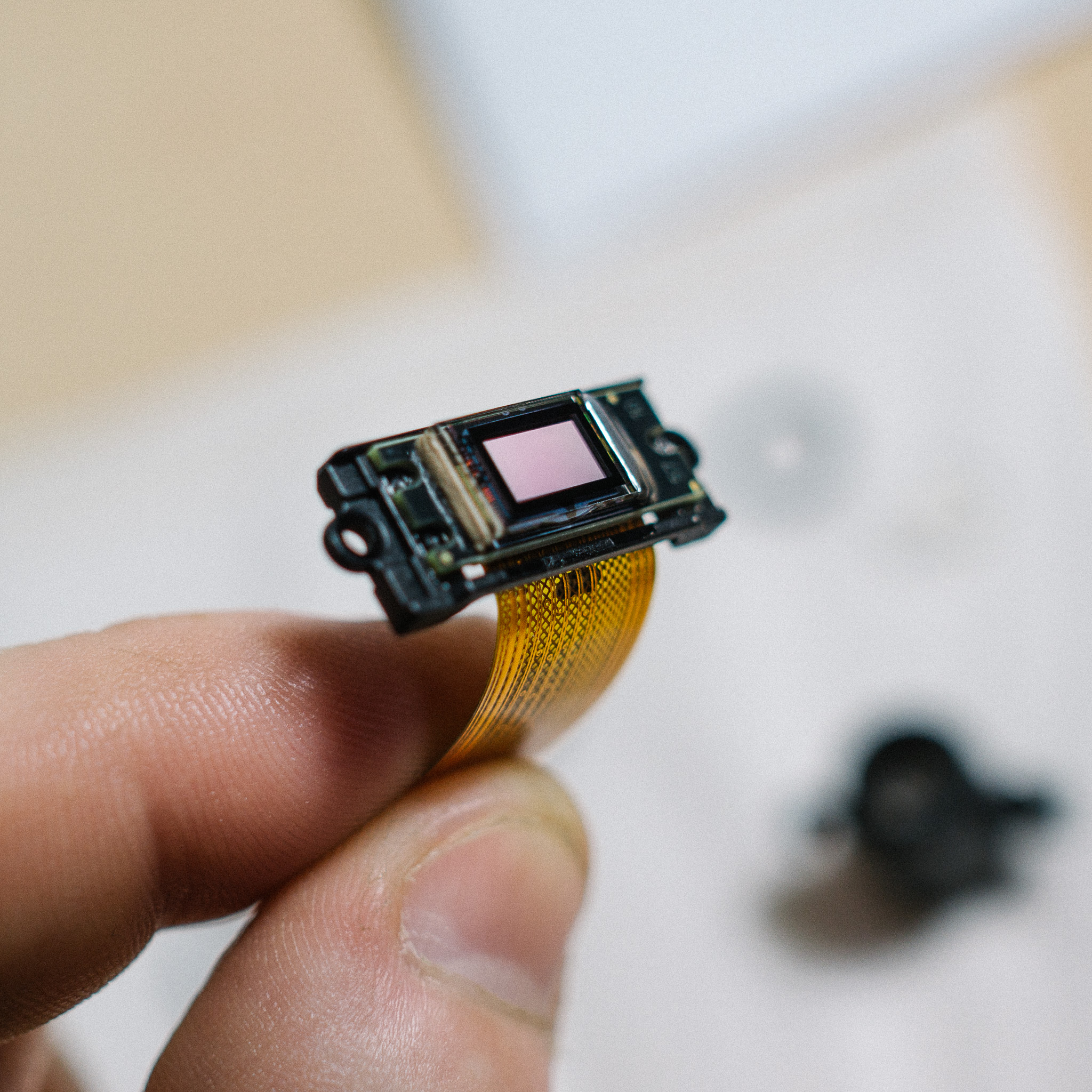