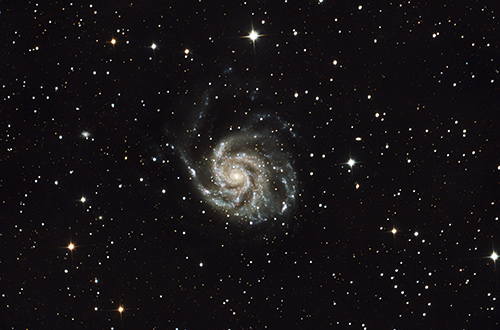 Well…getting better :) Tried out deconvolution for the first time, which definitely helped pull out a bit more detail. I overdid it though, and some ringing artifacts which I didn't notice at the time became apparent later (and “halos” in bright stars). Oops.

I'm using a bahtinov mask for focusing now, and managed to fix my guiding and polar alignment (mostly), so I can guide at ~1.2-1.6 arc-sec. My camera can only sample to 2.06, so I'm fine with that for now. And my processing skills are starting to catch up to the image resolution.

Which means it is time to bite the bullet and drag my scope indoors for collimation. I've been putting it off because it's cold outside and I'd prefer to leave the whole thing setup. Until recently, guiding + processing + focus have been overshadowing the collimation. But looks like it's starting to become a priority now.

For fun, here was my first attempt at processing M101. I was super happy with it, exported, uploaded to imgur and then….blagh, lookit all those problems. Started from scratch and re-processed, happy I did so :)

I still feel like there is a lot of detail hiding in the raw frames which I wasn't able to pull out. I'd like to try another processing with a much smaller subset of images, selected for their eccentricity and FHWM. Curious to see if less – but better – data would help.

Also need to figure out these goddamned flats. It seems something goes wrong every time I try to take them :(